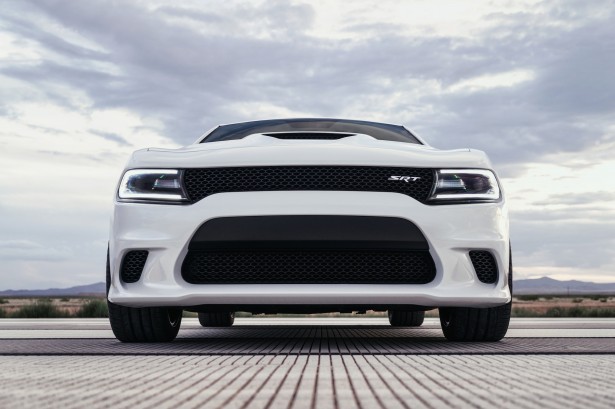 [Update] Dodge has released a video of the 2015 Charger SRT Hellcat going around an oval test track. The point here is to prove the immensely powerful Charger’s top speed of over 200 mph. In the following video you will see the Charger Hellcat reach 204 mph.

[Aug 14, 2014] Dodge has unveiled the 2015 Charger SRT Hellcat at Woodward muscle car fest in Detroit. It is without doubt the most powerful sedan in the world. The 6.2-liter supercharged V8 puts out 707 hp and 650 lb-ft of torque overshadowing even the mighty Mercedes-Benz S65 AMG, Bentley Continental Flying Spur and Rolls Royce Wraith. Although, Dodge hasn’t revealed the price of the uber sedan, it would most certainly be the cheapest performance sedan.

Dodge has given the ultimate Charger an 8-speed automatic transmission which is claimed to be more efficient and economical at the same time. However, when it comes to miles per gallon, the 6.2-liter V8 at full chat will empty the fuel tank in just 13 minutes. If you do want to just cruise around town, the engine can be limited to 500 hp which should use a little less fuel.

One of the other aspects of the Dodge Charger SRT Hellcat is that, it’s drag strip ready. It can do the quarter mile in 11 seconds on standard rubber and 0-60 mph is over in just 3.7 seconds. Top speed is rated at 204 mph!