The Aston Martin Valkyrie is going to be a beast of a car, we know that. We also know that its 6.5-liter V12 will be the most powerful naturally aspirate engine ever. This was confirmed by Cosworth – the British company tasked with building the Valkyrie’s engine. 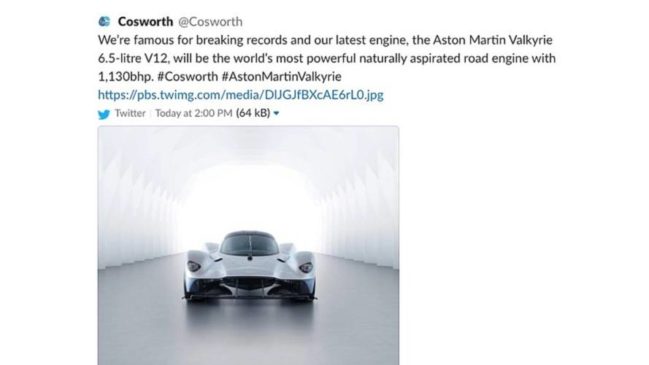 The tweet was deleted shortly after with Cosworth citing “inaccurate information” as the reason. That inaccurate information probably concerns the power output of the V12 engine alone. The tweet suggests that the 6.5-liter naturally-aspirated V12 unit will produce 1130 horsepower, which we think is unlikely. The number most definitely refers to the combined output of the internal combustion engine and the electric motors. The engine is likely to produce somewhere close to 1000 hp, while the electric motors would add another 130 hp.

As if 1130 hp was not enough, Aston Martin will also build a more intense track-only AMR Pro version with even more power.