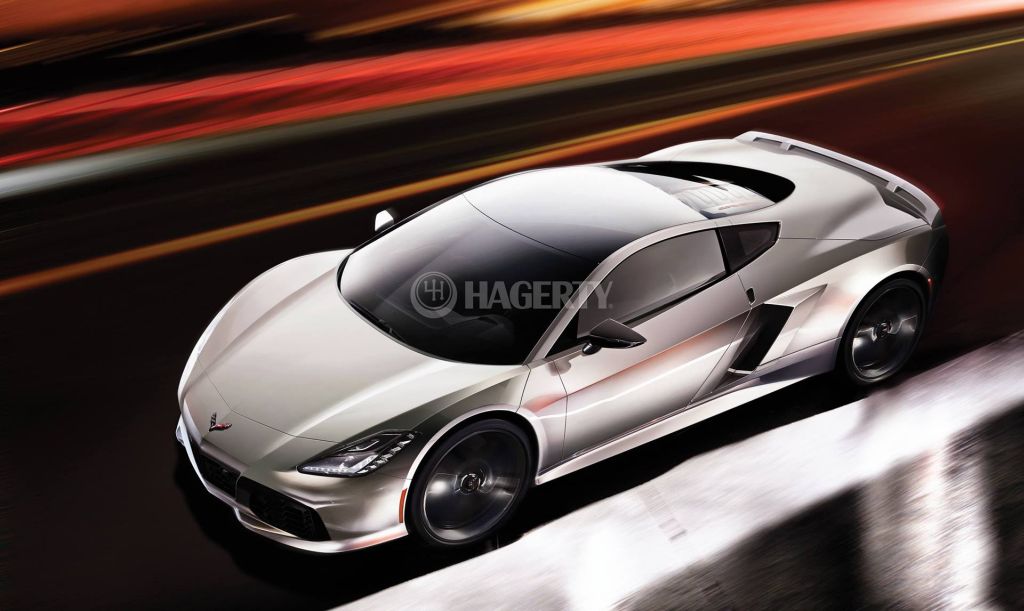 A mid-engine Corvette is coming to take on the Ferraris and McLarens.

The mid-engine Corvette has been in the news for quite sometime now. Test mule of the Corvette C8 have also been spotted on multiple occasions. But now, armed with insider information, Hagerty has come up with a speculative rendering. So, this is what the new Corvette might look like.

The upcoming Corvette C8 will have its engine in the middle allowing for a low front scuttle. It might feature a similar front fascia as the C7 Corvette along with a familiar quad-tail lamp setup at the rear. The car will feature a raked rear clam shell with a glass engine cover, while large air vents on the sides will help the engine breathe.

The C8 will be built around a hydroformed aluminum space frame with die-cast magnesium reinforcements. Carbon fiber, fiberglass and reinforced plastics will form the bodywork of the car. The mid-engine Corvette will ride on magnetorheological dampers and will be offered with carbon ceramic brakes.

The Corvette C8 is likely to be offered with a range of high-performance V8 engines. In base trim, the car might come with an updated 6.2-liter, LT1 V8 engine producing upwards of 600 hp. The range-topping model could get a twin-turbo V8 hybrid with over 1,000 hp! Chevrolet might not offer a manual gearbox on Corvette C8. Instead, it is likely to use a 7-speed dual-clutch automatic with paddle shifters.

And now for the big one. How much would the mid-engine Corvette cost? Rumours suggest that the base price of the Corvette C8 could be around $70,000!