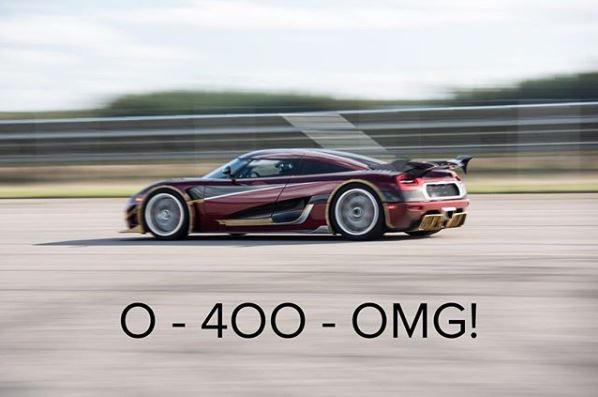 Last month, the Bugatti Chiron set a new 0-400-0 record. It did it in 42 seconds, which is quite an impressive feat. Now, Koenigsegg accepted the challenge and decided to take on Bugatti. In an Instagram post, The Swedish supercar maker teased the record attempt with a picture of an Agera RS titled ‘0-400-OMG’.

Well, they just did it. Bugatti has lost the bragging right as the Koenigsegg Agera RS set the new fastest 0-400-0 time. The Agera RS accelerated to 400 km/h and braked to a stop in just 36.44 sec. That’s 5.56 sec faster than the Chiron!

In a previous post, where the Agera RS is seen running on the company’s test track, Koenigsegg even made a direct hit to Bugatti with a caption which went like this -- “Agera RS pre-delivery shake down run. Beautiful autumn day… Long airstrip…. Bye-bye Bu…? To be followed….

Clearly the ‘Bu..’ is to be followed by ‘Gatti’ which also indicates how confident the company w for its record attempt. Considering that the One:1 was able to do a 0-300-0 in just 17 seconds, we understand where that confidence comes from. Keonigsegg has also mentioned on its website that the One:1 can do the 0-400-0 run in 30 seconds. While the attempt won’t be made in a One:1, but the Agera RS is no less a monster. Expect Koenigsegg to announce the record time soon.

Even if Koenigsegg isn’t able to do the record run in 30 seconds, even if the Agera RS is five seconds off, it would still be a discredit to the French marque. Consider this --  The Bugatti Chiron is a new car, revealed after years of rigorous development by VW’s finest engineers as the successor to the Veyron. Multiple changes have been made to W16 quad-turbo engine for the Chiron to take the mantle for the world’s fastest car from its predecessor. If a seven year old model with half the cylinders in its engine, made by a small company with much smaller resources is ten seconds faster, that should be something to ponder upon for Bugatti.

The above comparison isn’t to undermine the Chiron and its performance. The car is probably going to break the land speed record for road legal cars next year. Instead, it tells us a lot about Koenigsegg as a company, the mind behind it and the engineering prowess.

On another note, the record would be a great send off for now the legendary Agera, until the successor arrives next year.