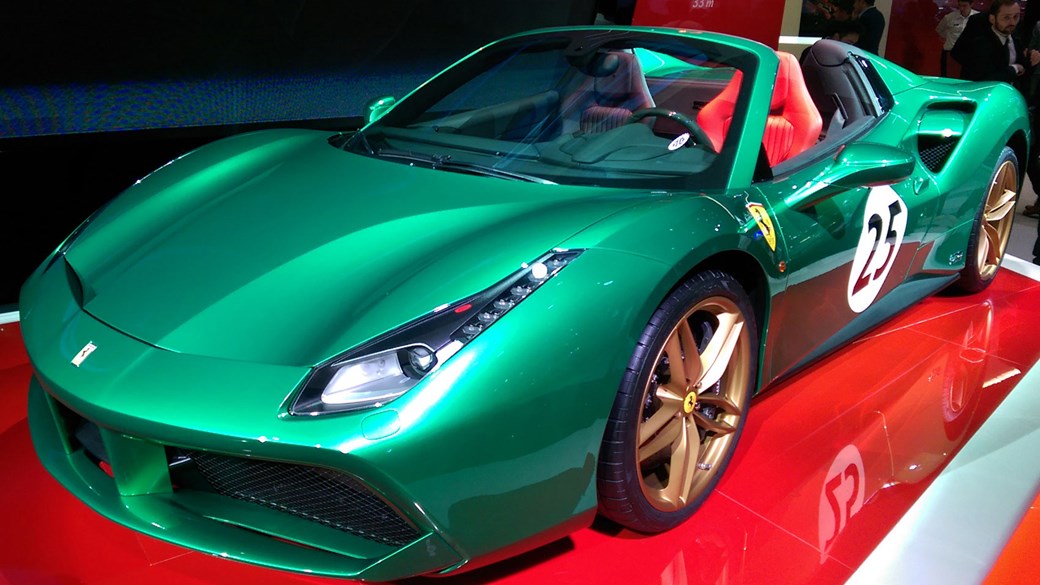 Ferrari will mark its 70th anniversary in 2017. As a celebration, Ferrari has introduced 350 unique models offered in 70 distinct liveries.

Ferrari showcased a some of the 70th anniversary models at the 2016 Paris Motor Show. As the new Ferrari GTC4 Lusso T took to the stage, all eyes were on the stunning LaFerrari Aperta– one of the anniversary edition models on the stands.

Next up, a Ferrari 488 Spider ‘The Green Jewel’. This car wrapped in a metallic green paint mimics the livery on David Piper Racing 365 P2 which won the 9 Hours of Kayalami in 1965 and 1966. One of the key design elements is the red driver’s seat and #25 on the sides.

A bright red Ferrar 488 GTB is also on display. This is aptly named, ‘The Schumacher’ to pay homage to the F2003-GA Formula 1 car in which Michael Schumacher won the 2003 F1 World Championship. The unique livery on this car is inspired by the 2003 F1 car and features a bright red exterior with white details, yellow seats and shift paddle.

Furthermore, ‘The Stirling’, an F12 Berlinetta in Blue Scuro with a white horizontal stripe on its bonnet reminds of the Ferrari 250 GT Berlinetta SWB which was driven by Sir Sterling Moss in the 1961 Tourist Trophy.

Ferrari hasn’t revealed the full list of special edition models yet. However, the list does include a California T ‘The Steve McQueen’ inspired by Steve McQueen’s 1963 250 GT Berlinetta gifted to him by his wife.