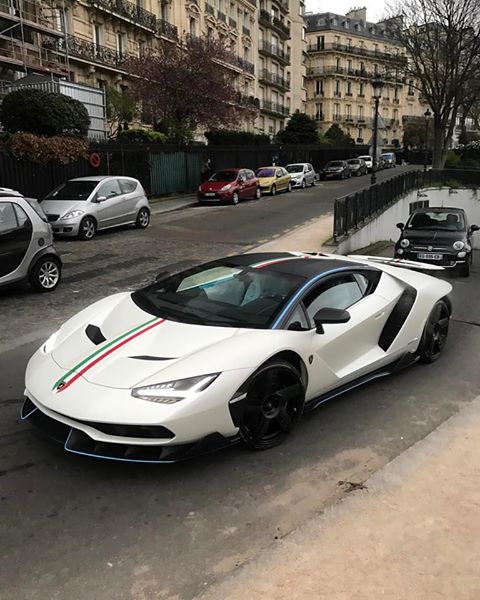 A Lamborghini Centenario was spotted in Paris recently. It is the same one which was seen outside a dealership in Qatar. That personalized license plate though. I’m sure it wasn’t cheap.

Sheikh Rashid of the UAE was the first to receive his Centenario specc’ed in a brilliant orange. A few days later a this white Centenario was spotted in Qatar. Images of a black example have recently surfaced Instagram. We’re not sure where it was seen but we will update you on that soon.

Lamborghini is building 20 coupes and 20 roadsters. Looks like, delivers of the coupes have commenced already. Roadster owners will probably get the keys to their supercars once all 20 coupes are delivered.

The Lamborghini Centenario was built to commemorate the 100th birthday of their founder, Ferruccio Lamborghini. The car was showcased at the 2016 Geneva Motor Show. The roadster version made its debut the same year at Pebble Beach.

As we know, it is based on the Aventador and uses the same 6.5-liter naturally aspirated V12 engine. The motor has been tuned to produce 759 hp instead of the 740 hp available on the Aventador.